Posted on May 21, 2019 Posted By: Magdalena StoevaCategories: News 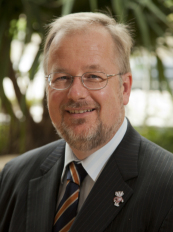 The IOMP John Mallard Award honours a medical physicist who has developed an innovation of high scientific quality and who has successfully applied this innovation in clinical practice.
Amongst several very high calibre nominations from all over the world the Awards and Honours Committee considered Dr.Thomas Rockwell Mackie as an outstanding medical physicist, with impressive capacity to innovate, develop and commercialise technological advance in the field of radiation therapy and its application in clinical practice. He has made invaluable contributions in academia, education and mentoring and coaching of many medical physicists.
Some main achievements:
• During his PhD thesis work, he co-developed the convolution/superposition method for radiotherapy dose calculation.
• In collaboration with some colleagues, he developed a method for the calculation of dose kernels. This collaboration led to fine tuning radiation treatment planning algorithms for photon external beam dose calculations in most commercial treatment planning systems.
• With Herb Attix they solved the problem of Cerenkov radiation contamination of measurements with scintillation dosimeters in megavoltage beams, paving the way for a new class of optical radiation dosimeters.
• In 1988, Dr.Thomas Rockwell Mackie was tasked with developing a stereotactic radiosurgery (SRS) program and along with computer programmer Mark Gehring, developed their own SRS treatment planning system.
• Dr.Thomas Rockwell Mackie is highly recognised for developing helical tomotherapy. In 2011, over 350 clinical tomotherapy units were in use around the world based upon his innovation.
• In addition to a researcher with more than $35 million in research grants, 180 publications, and 40 PhD theses supervised, he was a co-founder of Geometrics Corporation which developed the Pinnacle treatment planning system now sold by Philips Healthcare utilized in millions of radiation therapy treatments worldwide. He was also the co-founder of TomoTherapy which developed the helical tomotherapy system that was the first dedicated IMRT and CT guided treatment system and is in use in more than 35 countries.

In recognition of the extraordinary positive impact that Dr. Thomas Rockwell Mackie over the entire field of medical physics, the IOMP has decided to award the John Mallard Award to Dr. Mackie.