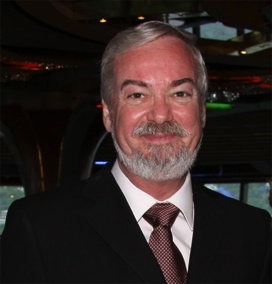 Professor Herbert Frederick Voigt III, Past President of the International Union for Physical and Engineering Sciences in Medicine (IUPESM), and Past President of the International Federation of Medical and Biological Engineering (IFMBE) – of Milton, MA, passed away suddenly on 25 January 2018. He is survived by his loving wife Ronit, and children Justin and his wife Jennifer, granddaughters Madeline and Charlotte of Milton, MA, and daughter Emily of Milton, MA. He leaves behind his mother Simona and eight siblings.

Professor Voigt was elected in 2006 to be the President of IFMBE during the term 2009 to 2012, and subsequently to be the President of IUPESM from 2012 to 2015. As President of IUPESM, which is the parent organization of IFMBE and International Organization for Medical Physics (IOMP), he played an important role in promoting the collaboration and development amongst these constituent organizations. Professor Voigt was a visionary leader, a great team builder and a highly respected colleague. During his presidency of IFMBE and IUPESM, Professor Voigt made significant and valuable contributions to the global community of Biomedical Engineers and Medical Physicists.

Professor Voigt was indeed a bright biomedical engineer. He earned his doctorate in Biomedical Engineering in 1980 from the top ranked Johns Hopkins University and spent his professional career devoted to education and research at another top ranked Boston University. He was a Professor of Biomedical Engineering and an Associate Research Professor of Otolaryngology at Boston University. Professor Voigt was an illustrious researcher and innovator. Professor Voigt’s research interests included auditory neurophysiology, specifically cochlear nucleus neural circuitry, heavy metal detection and global health. He was a dedicated professor and mentor to students providing consistent guidance and mentorship.

Professor Voigt served as the President of the Biomedical Engineering Society (BMES) in 1999 and the President of Alpha Eta Mu Beta from 2002 to 2008. He also served as the President of the American Institute for Medical and Biological Engineering (AIMBE) from 2006 to 2007. He received the BMES’s President’s Award in 2002 and its Distinguished Service Award in 2004, and was elected to the Johns Hopkins Society of Scholars in 2003. Professor Voigt was an AIMBE Founding Fellow in 1998 and a BMES Fellow in 2004. He was selected by the Institute of Electrical and Electronic Engineers (IEEE) as a Distinguished Lecturer from 2012-2013 and was also an honorary member of the Swedish Society of Medical Engineering & Physics in 2012. He received the honor of serving as a Fulbright Scholar in Peru in 2015.

Professor Voigt was a tireless worker. He spent enormous time with IFMBE colleagues at numerous events across the globe, with active involvement. He listened to different points of view on various matters and played a key role in reaching consensus among international colleagues. He was energetic and he showed interest in the BME activities of the constituent societies of IFMBE. He was very good-natured and he worked very well with diverse BME representatives from different countries.

Over the years, Professor Voigt’s illustrious efforts positively impacted a huge number of Biomedical Engineers and medical physicists worldwide. To cite just a few, he played key roles in IUPESM World Congresses in Munich in 2009, in Beijing in 2012 and in Toronto in 2015, which are major tri-annual events of Biomedical Engineers and Medical Physicists worldwide, in dozens of IFMBE conferences in Europe, North America, Latin America, and Asian Pacific regions, and in the Global Medical Devices Forum 1, 2 and 3 of the World Health Organization (WHO). He was active in the International Council of Scientific Unions (ICSU), where he initiated several cluster activities of interest to multiple international professional organizations. Professor Voigt took center stage in most events making important statements on the current and emerging trends and challenges, thus encouraging educators, students and researchers across the world.

Professor Voigt was warm, friendly and courteous. Undoubtedly, he was a devoted husband and affectionate father. He cared a lot for his family, talked about them and brought them to several international events. He appreciated their support. He was always kind and generous. He treated everybody fairly and with respect.

Professor Voigt was a dear friend to all of us. Our loss is irrecoverable. Our friendship as well as the delightful times that we, the IFMBE, IOMP and IUPESM volunteers, spent collectively with Professor Voigt to be involved in fantastic things to benefit the global biomedical engineering and medical physics community, will always be cherished. We will sorely miss our friend, Professor Voigt.

With Affection and Fond Memories,
International Friends from IFMBE, IOMP and IUPESM