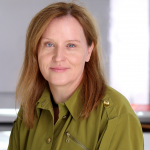 I wanted to be a scientist from early childhood. Initially, a palaeontologist (well, what child does not want to dig for dinosaur bones) and then at about 14 years of age, I decided to study physics – a subject that would enable me to understand the workings of our universe. It was not completely surprising, as I was good at maths and sciences, developing in year 6 (primary school) my own solutions to some combinatorics problems and equations with one unknown. When deciding on my university studies, I looked at the list of most difficult courses and right at the top was nuclear physics. So that was what I decided to enrol in; perhaps making my parents a bit disappointed for not going to medicine, but they would never try to discourage me from my own decisions. That it is perhaps what drove me in life: looking at difficulties as challenges that were there to tackle rather than being afraid of problems.

After successful undergraduate/MPhil studies, I got married and had 2 children in short succession. When my younger son was 3 months, I enrolled in Medical Physics MSc, followed by a PhD in Nuclear Physics. And yes, doing a PhD with too little kids under five was hard. Once the accelerator beamtime was allocated to a project, it was a 24 hour/day operation (I was using a high-energy carbon beam to produce In-111 in nuclear reactions). And on occasions, I had to bring my kids with me (telling them that we were going camping), settle them in a rollaway bed in the control room, while I was at the accelerator console monitoring the beam.

Have I met with discrimination? Yes, unfortunately. I feel that women have to prove themselves in a number of ways: a) that they are competent scientists and b) that they can manage work, high level appointments with family and household duties. But I can stand my ground. Luckily, times seem to be changing. In the years post PhD, I became the first female president of the Australasian College of Physical Scientists and Engineers in Medicine, I will be the first female president of AFOMP and now I am honoured to become vice president of IOMP. Additionally, I was a founding member of Women in Medical Physics and Biomedical Engineering Task Group under IUPESM. My work did not go unnoticed, as in 2019 I was included in the South Australian Women’s Honour Roll of women who have made a significant impact on the community, women who are role models and leaders.

So who am I as a leader? I am known for supporting inclusivity and diversity, excellence and professionalism, showing respect for others, with understanding of their career development, cultural background, gender and others. My leadership style is characterized by initiative and making things happen. I am also dedicated to promoting and supporting women in medical physics to ensure that they can take active participation in their profession, including conference presentations, project participation, officer and award nominations to advance their careers.

To conclude, I am honored to be elected vice-president of IOMP and while I understand that it is a big commitment, I am determined and undaunted and am looking forward to working with many medical physics colleagues around the world.