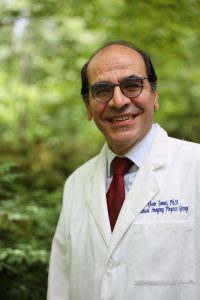 Ehsan Samei is a board-certified medical physicist and professor at Duke University, where he serves as Chief Imaging Physicist, director of the Ravin Advanced Imaging Laboratories, and director of the Center for Virtual Imaging Trials. He completed his graduate studies at Georgia Tech and the University of Michigan, and post-graduate training at Henry Ford Hospital.  He has been a visionary leader and founding force behind major scientific, educational, and professional initiatives in medical physics, including the Duke Medical Physics Graduate and Residency Programs, the Duke Clinical Imaging Physics Group, the Society of Directors of Academic Medical Physics Programs, the Center for Virtual Imaging Trials, and the Medical Physics 3.0 initiative.

Professor Samei’s research ranges from his pioneering work on medical displays, now the basis of international standards in that area, to formative work on in-phantom and in vivo image quality assessment, dosimetry and dose-quality monitoring and optimization, and virtual clinical trials.  Most notably, he has been a visionary role model for translational medical physics, where the merits of innovations are measured not in terms of publications alone but in terms of patient-informed practice of physics in clinical medicine. This has been the primary motivation behind the Medical Physics 3.0 movement, transforming the field towards broad(er) application of physics in medicine and more intentional commitment to integrated science and relevance in medical physics scholarship.  This is echoed through his over 300 refereed papers, 4 major books, and hundreds of conference papers and invited lectures. He has also been a committed educator, mentoring over 120 graduate students and junior scientists.

Professor Samei has received numerous extramural grants, been recognized as a Distinguished Investigator by the Academy of Radiology Research, and awarded the Farrington Daniels Award by the AAPM, Jimmy O. Fenn Lifetime Achievement Award by the SEAAPM, and fellowships of the AAPM, SPIE, AIMBE, ACR, and IOMP.  Throughout his career, he has faithfully served major professional organizations, major journals, and grant agencies, and has held elected leadership positions including the presidency of the SDAMPP, the chairmanship of the SPIE International Medical Imaging Symposium, and the upcoming presidency of the AAPM.