Is the dose to circulating blood in conformal radiotherapy of concern? 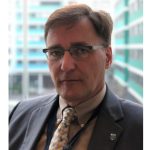 In contrast to chemotherapy, radiation therapy has always been seen as a very localized form of cancer therapy, because one tries to eradicate the tumor with a defined prescription dose while minimizing dose to organs at risk.

The number of radiation therapy options for cancer patients has increased significantly in recent years. For instance, volumetric modulated arc therapy (VMAT) is now being used in addition to intensity-modulated radiation therapy (IMRT) and proton therapy (IMPT). These modalities differ in the distribution of the low dose bath to the body outside of the planned target volume and in the overall and local treatment delivery time in a fraction (see figure below).

Dose to circulating lymphocytes is determined by the dose distribution, the fractionation, and the local dose rate relative to the dynamic blood flow. Physicists at several laboratories work on developing computational models to estimate dose to the circulating blood [2]. Consequently, circulating lymphocytes might soon be treated as an organ at risk in treatment planning.